Home \ News
Counterfeit Weed Vape Cartridges Are Everywhere — and They’re Making People Sick
Six weeks ago, an 18-year-old male patient showed up to NYU Winthrop Hospital in Long Island complaining about chest pain, nausea, fever, and shortness of breath. Initially, doctors thought he had pneumonia, due to his X-rays showing “haziness” in the lungs. Within 48 hours, says Melodi Pirzada, chief of pediatric pulmonology at the hospital, the patient’s condition worsened and he was sent to the ICU. There he was diagnosed with ARDS, a condition associated with acute lung injury. He was connected to a breathing tube and placed in a medically induced coma for one week.

Related: How to Spot a Bootleg Cannabis Vape Cartridge

The doctors were baffled as to how a healthy 18-year-old could become so sick, until the patient’s mother showed up at the hospital with something she’d dug up from her son’s wastebasket. It was a vaporizer cartridge with the label TKO Extracts, a licensed company based in California that sells THC products; the cartridge was later confirmed to be a counterfeit version of the company’s product, Pirzada says. Upon questioning, the man’s girlfriend told doctors that he had used the cartridge three days before he was admitted to the hospital. After being treated with steroids, the patient ultimately recovered, and was released from the hospital after two weeks.

Just one day later, a second patient showed up with completely different symptoms, including various nodules in the lungs; the 19-year-old suffered from coughing and chest pain, and had lost so much weight in the span of just two weeks that doctors initially suspected he had cancer. When a biopsy ruled that out, the patient said that he too had been using THC cartridges for the past three months, all of which had been purchased on the black market. (Marijuana is not legal for recreational purchase in New York state.)

Pirzada was baffled. Though she had only personally treated two such cases, in her 25 years of practice, she had never seen young, seemingly healthy men get so sick within such a short period of time. “It’s becoming very scary. Every day, new cases are adding up,” says Pirzada. “Because we didn’t have this problem three months ago.”

Indeed, what happened to the two men in Long Island has been happening across the country. As the dangers of e-cigarettes in general become more apparent, with the CDC announcing last week that it was aware of 193 potential cases of severe lung illness in 22 states linked to vaping (and one death in Illinois officially linked to vaping), the potential long-term health risks of vaping are becoming increasingly clear, from breathing difficulties to eye and airway irritation. And while it’s unclear exactly how many of these cases are attributable to products containing THC, as opposed to traditional nicotine e-cigarettes, Dr. Ileana Arias, senior scientific advisor and acting deputy director for non-infectious diseases at CDC, noted on a Friday conference call that “in many cases” patients had reported using THC-containing products, though the CDC declined to specify exactly how many.

In California alone, where recreational marijuana is legal, there have been 28 potential cases of acute lung disease among people who had recently vaped cannabis products, according to a spokesperson from the California Department of Public Health (CDPH). On August 12th, the CDPH released a health alert regarding a “cluster” of at least seven healthy adults in Kings County, California, all of whom had been admitted to hospitals between July and August 2019, and all of whom had presented with symptoms of severe acute pulmonary disease, including coughing and shortness of breath, and in some cases fever and vomiting. All seven of these cases — including an additional one reported following media coverage of the initial press release — were linked to THC vapes that had been purchased off the black market, Nancy Gerking, assistant director of public health of Kings County tells Rolling Stone, adding they were purchased at temporary, unlicensed “pop-up shops” in the area.

Cases of severe lung ailments linked to THC vapes have also been reported in Wisconsin and Utah. “Within the last few months it’s amazing how many cases from around the country have come into the spotlight,” says Dr. Raj Dasgupta, pulmonary and critical care physician at the University of Southern California who has treated many individuals with a history of e-cigarette use.

Because the investigation is still ongoing, neither the CDC nor the CDPH would comment on which specific products or brands were implicated, nor would it comment on the results of any tests it had conducted. “The investigation is ongoing. We cannot provide this information at this time,” a CDPH spokesperson told Rolling Stone.

But it is Pirzada’s belief that many of these cases are linked to counterfeit THC products specifically, and not e-cigarettes themselves. “E-cigarettes cause their own problems. But this is a totally new issue,” she says.

This revelation is vindicating for those like the admin behind DankbustersOfficial, an Instagram account warning cannabis users against purchasing black-market THC cartridges. The admin, who asked to remain anonymous, tells Rolling Stone that while bootleg THC cartridges have been widely prevalent since cartridges were introduced to the market a little more than a decade ago, they’ve become much more common as the market has exploded in recent years, with vendors advertising counterfeit and bootleg products on Snapchat and Instagram. “People have been told by their connects that this stuff is clean and safe, so I have to rewrite an entire narrative in their minds,” the admin says. Some of the products from brands like Mario Carts are wholly unregulated and sold by black-market dealers who buy empty packaging, then fill the pens themselves and sell them for cheap.

According to photos Gerking provided to Rolling Stone, one of the cartridges involved in the reports was labeled West Coast Carts, a brand popular on Instagram. Another, Dank Vapes, is a black market brand of ambiguous origins, according to a recent investigation from the website Inverse. Neither business appears to be registered with the manufactured cannabis safety branch of the California Department of Public Health. Further, Dank Vapes has been determined to contain various pesticides, according to lab testing conducted by the cannabis testing app Doja. Requests for comment sent to a Hotmail account on the “official” West Coast Brands’ Instagram went unreturned, as did a request sent to one of the many accounts purporting to be the “official” Dank Vapes on Instagram.

Other common culprits are counterfeit versions of dispensary brands, such as Bulletproof Vapes, with dealers purchasing fake dispensary product testing stickers as a way of making them look more legitimate. Either way, some common contaminants, according to the lab tests DankbustersOfficial has conducted alongside third-party cannabis testing company BelLabs, include pesticides like myclobutanil, a fungicide that, when vaporized, converts into hydrogen cyanide, a substance that is extremely toxic when inhaled and was used as a chemical weapon by the French army during World War I. There are also concerns that “heavy metals, such as lead, from the cartridge and its heating coils may also contaminate the products,” says Bonnie Goldstein, the medical director for Canna-Centers Wellness & Education and a medical advisor for the cannabis brand database Weedmaps. The DankBusters Official admin says he’s even seen a house fly inside a counterfeit Smart Cart before.

Lab testing of Pirzada’s patient’s cartridge revealed that it tested positive for not just THC, but also vitamin E. If inhaled, oils like Vitamin E can cause lipoid pneumonitis, a rare condition that results from fat particles being inhaled into the lungs, says Pirzada. When she submitted the results to the Department of Health, it informed her that there were two other cases of THC cartridges testing positive for vitamin E oil, though she says the cartridge is currently being retested for other substances.

While the lack of regulated cannabis markets in the majority of U.S. states, where recreational marijuana is still illegal, creates the ideal conditions for black-market cartridges to thrive, interestingly, the states that appear to be most flooded with black market or counterfeit THC cartridges are those like California, one of the 11 states (plus D.C.) where recreational marijuana is legal, says the DankBustersOfficial admin, who adds that the state is currently flooded with counterfeit versions of pens from regulated brands like Rove and Kingpen. “In the legal markets and states, people can say, ‘Hey, why walk into that dispensary when I can give you the ‘same product’ for a third of the price?'” 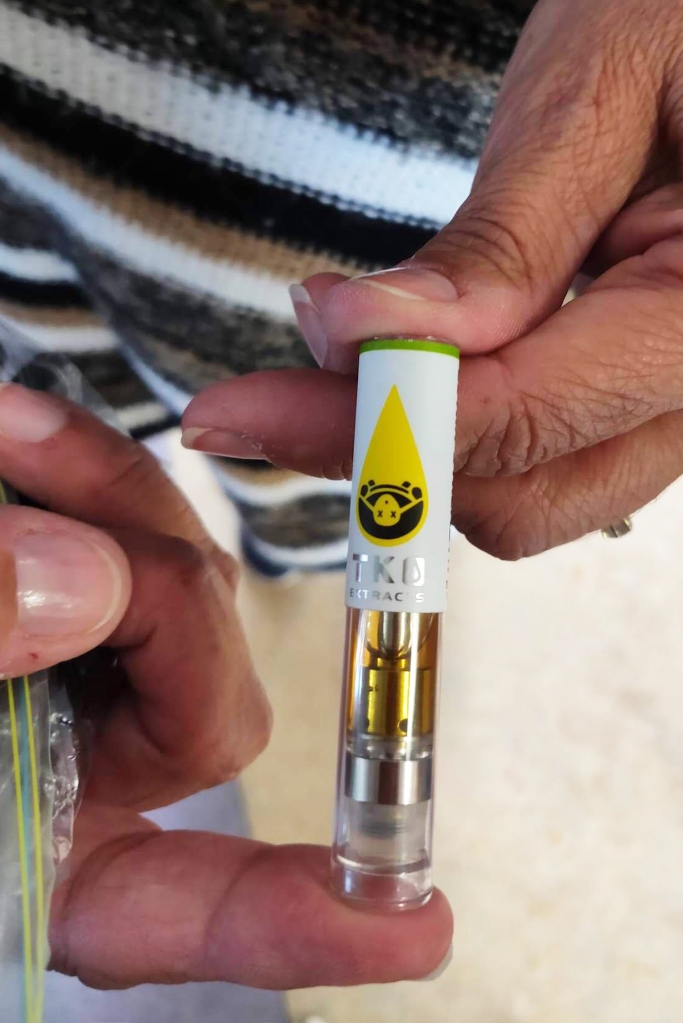 On accounts like DankbustersOfficial and subreddits like r/cleancarts, users will share tips for how to discern bootleg cartridges from ones from licensed dispensaries, such as analyzing the consistency and texture of the oil (it should be fairly thick and move slowly when the pen is turned upside-down), as well as whether the cartridge has a certificate of analysis (COA), which often includes a batch number to cross-reference with the brand’s website. But this is by no means foolproof, as black-market dealers have been known to label their products with fraudulent stickers, and the truth is there’s no consistent and reliable method to ensure that the cartridge is real or safe, says the admin behind DankbustersOfficial. “Unless you’re spending $800 on every cartridge to get it tested, there’s no way to 100% know,” he says.
© Copyright 2021 Obsidian Supply. All rights reserved.
Terms of Sale
|
Terms of Service
|
Privacy Policy
Thank you for visiting. Please confirm that you're over 21.
By continuing to use this website, you agree to our
Privacy Policy
, and
Terms of Use